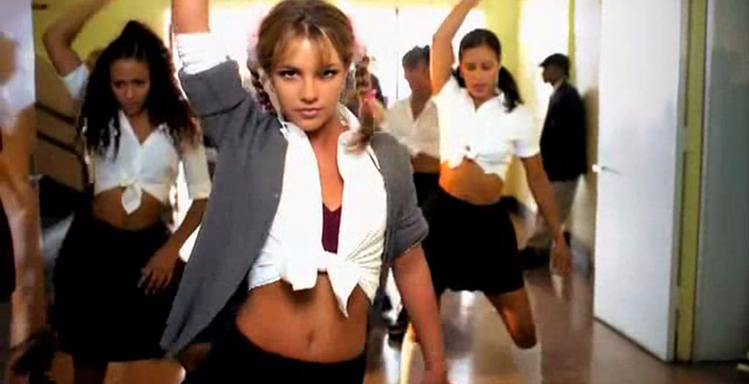 John Seabrook, schrijver van The Song Machine: Inside the Hit Factory:
“Clive Calder, who was the head of Jive, signed her to a provisional contract. This was a very significant moment in pop history: The signing of Britney Spears as a sort of girl-next-door teenager, rather than as a Whitney Houston-esque diva. One of the calculations there was, Clive Calder was notoriously cheap, and Whitney Houston was notoriously expensive. So Britney Spears seemed like she would be cheap too, because she was just a teenager from Louisiana, and wasn’t demanding in any way.”

Barry Weiss, directeur van Jive Records:
“I remember when we got it back with Britney on it, she had that “oh BAY-BAY BAY-BAY,” these ad libs. We thought it was really weird at first. It was strange. It was not the way Max wrote it. But it worked! We thought it could be a really good opening salvo for her.”

John Seabrook:
“Before the song came out, nobody in America liked the hook, “hit me baby one more time.” Everybody thought it was some sort of weird allusion to domestic violence or something. But what it really was was the Swedes using English not exactly correctly. What they really wanted to say was, “hit me up on the phone one more time” or something. But at that point, Max’s English wasn’t that great. So it came out sounding a little bit weird in English. But when they tried to get him to change it, he said, “No, it can’t be changed. That’s it.””

Britney Spears in een interview in 2001:
“There are so many other teenagers out there that dress more provocatively than I do and no one says anything about them. How can I explain this? I don’t see myself — hand on the Bible — I know I’m not ugly, but I don’t see myself as a sex symbol or this goddess-attractive-beautiful person at all. When I’m on stage, that’s my time to do my thing and go there and be that — and it’s fun. It’s exhilarating just to be something that you’re not. And people tend to believe it.”